On Wednesday, several cities have experienced their hottest july 1st ever …

The 40 degrees temperatures were grazed in Paris. With 39.7 °,  never seen on the first day of July, not being so hot in the capital since 1947.  The list of records for July is expanding with the temperatures recorded in Roissy, Nemours, Troyes, Evreux, Beauvais, Rouen, Amiens, Lisieux … when the fountains were taken over and big and small shaded lawns and public parks prized.

Elsewhere, 40 ° were grazed or exceeded, without constituting to records, said Meteo France.

If these high temperatures have welcomed some, it should be remembered that they can
cause real problems for the most vulnerable people.  The Prime Minister called for “solidarity” that must “play full” face of the heat. “We must of course” yield to no panic, “said Manuel Valls when he visited the hospital Institute of Our Lady, in the 15th arrondissement of Paris.

The orange alert for the heat involved in the early evening on Wednesday was 47 departments, seven more than in the morning. 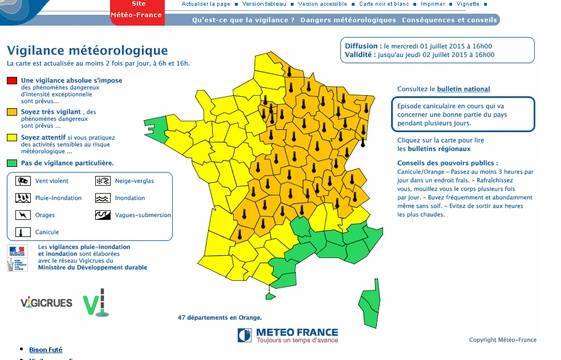 The hot weather was also causing various inconveniences throughout the country.

The prefecture of the Loire had to place the water consumption in the department as “vigilance” because of the lack of rainfall and high temperatures, the first such measure since the beginning of the heat wave on Tuesday.

In Paris, high temperatures have led to a break in the power supply in the middle of the afternoon near the Gare Saint-Lazare, where the traffic was “greatly disturbed” for about an hour, said SNCF.

In the West, where the heat wave had caused a break in the power supply affecting a million homes, the situation has been restored in the day.

The heat wave will expand progressively on Thursday in the eastern regions, including Rhone-Alpes, according to Météo-France.  Of the 47 departments in orange alert heatwave, the maximum temperatures expected on Thursday will remain in the range of 35-39 ° C.

The Tomb of Maréchal Pétain Vandalized on the Île d’Yeu

Looking for a Job ? The Police Nationale will Recruit 8000 People

Coronavirus in Austria: Vaccination will be Imposed from February 1st

Coronavirus: The Confinement of Unvaccinated People Deemed “Not Necessary in France” by Emmanuel Macron

Coronavirus in Germany: Angela Merkel Announces Restrictions Only for the Unvaccinated